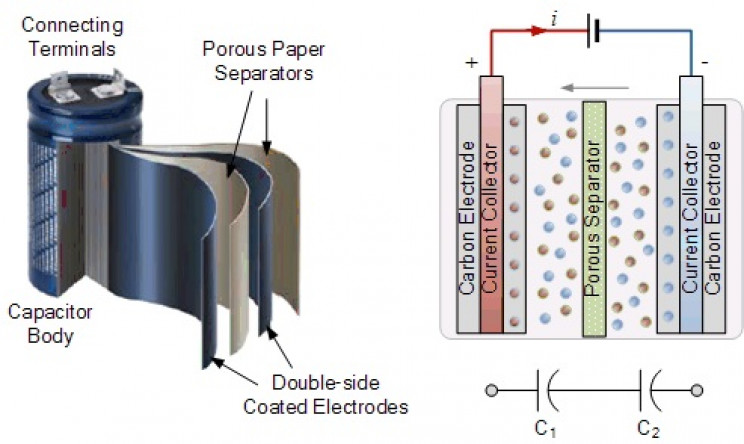 Every electronic device has at least one thing in common, they all require electricity. Until recently on the consumer level this meant using batteries, but recently new kinds of power storage devices called ultracapacitors have started to make their way into common everyday electronic devices.

What are ultracapacitors? Many people believe them to be the power source of the future for our growing supply of mobile electronics.

What Is An Ultracapacitor?

Batteries to this point have stored electricity chemically inside an enclosed cell. The chemicals inside the battery break down over time and no longer hold a charge. In an ultracapacitor electricity is stored between two charged plates and unlike batteries that electricity can be discharged all at once instead of trickling out a little at a time.

This is most evident in the now commonplace automatic defibrilators that are seen in public places to help revive a person whose heart has stopped. The ultracapacitor inside the device discharges rapidly, allowing the lifesaving electrical shock to be delivered to the patient.

Another similar application lies in such common objects as photography flash units. Robert Tressler of Maxwell Technologies points out many more devices and consumer electronics applications for ultracapacitors that may become more prevalent as the technology continues to improve.

One of the more exciting and potentially world changing applications of this technology lies in the potential benefits of using ultracapacitors in such things as electric cars. One of the most problematic aspects of traditional battery powered electric cars is the infrastructure and time needed to recharge them. Since an ultracapacitor can charge in as little as 90 seconds the idea of pulling up to a filling station and recharging within a few minutes will potentially be a reality in a few years time.

Ultracapacitors have a major drawback that has kept them out of most consumer products, they cannot hold large amounts of power. Recent advances have increased their capacity but to date the most advanced consumer devices using ultracapacitors are devices like flashlights and cordless drills. Because the cannot hold large amounts of power it is necessary to recharge them more often, but with such quick recharge times this is not a significant issue.

The most pressing issue at this point appears to be that of passive discharge. Unlike common rechargeable batteries that leak only about 10% of their energy over a month in storage an ultracapacitor will lose roughly half of its energy. Again, this may not be a significant issue considering the fact that it can be recharged to it’s full power state in a few minutes, but the loss of so much energy is a concern that still needs to be addressed.